"A Trill of a Lifetime"

We immersed ourselves in the emergence, hiking toward the calling—louder, louder—I could hear at least two species singing and the air was full of dark bodies flying. Near a cherry tree you could hear the crescendo—loud then soft, loud then soft—better than any orchestra. We had the best seats in the “house”—our legs—as we experienced this 17-year symphony. 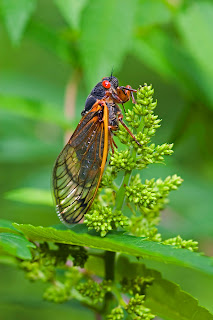 No other insects in North America excite as much curiosity and wonder as do periodical cicadas when they make their sudden appearance every 13 or 17 years. Periodical cicadas are widely distributed in the eastern United States (east of the Rocky Mountains), but occur nowhere else on earth There are seven species of periodical cicadas—four with 13-year life cycles and three with 17-year life cycles. The best way to identify the species is by sound as each species song is species specific.

After years of living in underground tunnels, thousands of periodical cicadas emerge from the earth as if by a predetermined signal, shed their nymphal skins, and spread through the nearby trees and bushes. Up to 40,000 can emerge from a under a single tree! 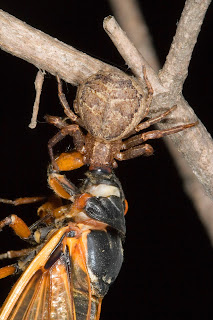 The cicada's precise but prolonged time schedule revolves around survival for the masses. When a large population of juicy insects appears on the scene, predators make the most of the situation, but simply cannot eat all the insects. Thus, a significant number of cicadas live to reproduce. Long-lived predators may actually remember the feast and return to the scene in subsequent years. Short-lived predators, being well fed, from the cicada banquet, reproduce successfully and leave a large population to await the next year's emergence. However, the “next” emergence doesn't happen for another 13 or 17 years, so the periodical cicada is able to outlast and escape its enemies.

From morning 'til night the males fill the air with their loud, droning song. The song is like the familiar sound of the common, dog-day cicada that fills the summer evenings, only it is louder and heard at the end of spring. (See our article on Summer Cicadas). The males are the only ones singing.

During 2011 The Great Southern Brood (XIX) will emerge. Their deafening drone will perk up woods from Illinois to Louisiana and Virginia to Georgia. There are 15 broods of cicadas in North America—twelve 17-year broods and three 13-year broods. 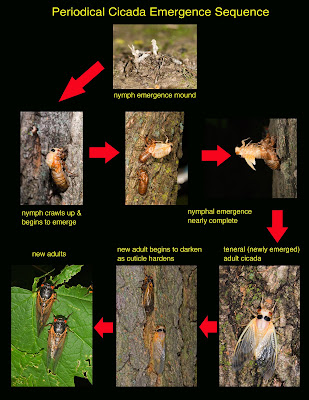 Periodical cicadas spend 13 or 17 years eighteen to twenty-four inches deep in the soil of wooded and forested areas feeding on sap from tree roots. They dig their way out of the soil during late May and June and climb up tree trunks, posts and poles to molt into adults. The adult insect is about one and a half inches long with a black body, red legs, and red eyes. They have piercing and sucking mouthparts and will feed on a variety of woody vegetation. Each adult may live five or six weeks, they will mate, and the female will pump her egg in slits of small twigs and shrubs using her sickle-like ovipositor. (This will cause some twig dieback but no long-term consequences to the tree.) The eggs will hatch after six to seven weeks and the newly hatched nymphs (about the size of an ant) fall to the ground and burrow until they find a suitable tree root, where they feed and wait. The nymphs will undergo five molts in their 13 or 17 years. 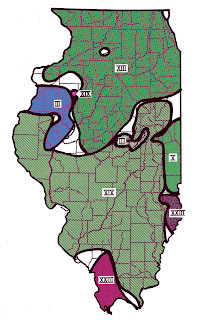 Perhaps Aldo Leopold described them best when he talked about the passenger pigeon—They traveled the countryside this “traveling blast of life;” like Leopold’s pigeons they will also disappear, unlike the passenger pigeon however, the cicadas will return. If you are an eager periodical cicada watcher, you need not despair as you wait for the next emergence in 13 or 17 years. Several broods of both 13 and 17 year cicadas are found in Illinois, so every few years, if you are willing to travel a little, can provide a periodical cicada viewing opportunity and as an entomologist from Iowa states, “a trill of a lifetime!” 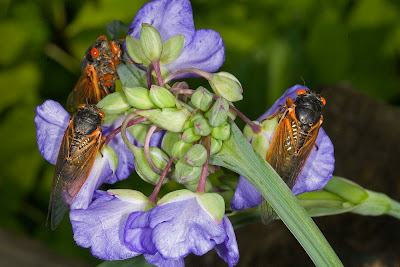 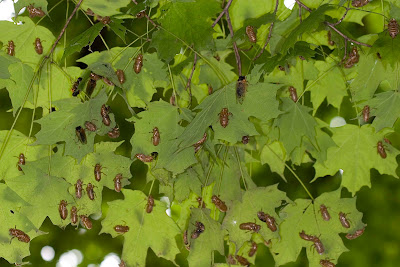 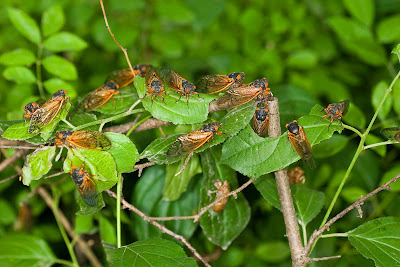 A cicada emergence is something that must be experienced. Brandi Sangunett, a masters student in Natural Resources and Environmental Sciences at the University of Illinois, had the opportunity to experience just such an emergence during Memorial Day, 1998. " My husband and I went camping at a beautiful place called Pounds Hollow in southern Illinois. The trees around the campground were littered with the shells of cicadas; the ground was covered with tiny holes from which they left their terrestrial homes and began an arboreal existence. At night, as we were sitting around the campfire, they began coming out of the ground in droves. They crawled up any upright object, including our legs, to molt from their last instar into adulthood. They also began falling from the trees as they lost their footing and pummeled us like dive-bombers. As we slept in our tent, we could hear them crawling up the sides. After they reached a suitable place under our rainfly, we could hear them cracking open. They emerged as white, ghostly aliens and slowly unshriveled into eerie black creatures with demon-red eyes. In the morning as I began taking down the tent, I removed the rain fly and a gaggle of them escaped into the trees. The air was filled with an ominous humming which could be heard for miles around. The entire forest sounded like a huge machine or like the hum of buildings in a city.”