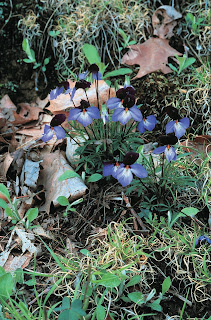 Here the landscape consists of level to rolling uplands interspersed with deeply cut rivers and ravines with well-developed floodplains. It is a land of deep, forested ravines with intervening flat prairie openings. The area was covered by Illinoian age glaciers. Bedrock outcroppings are common in some locations. This division has two sections—Galesburg and Carlinville—separated by the Illinois River valley.

The Galesburg Section is north of the Illinois River valley; both the Spoon and La Moine rivers drain this area. The amount of prairie here once almost equaled the amount of forest. One interesting habitat type is the dry-mesic barren, also known as an oak opening. In the spring at Argyle Hollow Barrens Nature Preserve look for the very unusual bi-colored bird’s foot violets growing among the mounds of lichens and mosses. 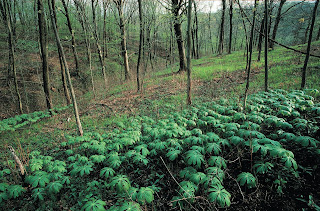