An old adage that a lumberman is known by his chips certainly applies to the pileated woodpecker. When it attacks with powerful staccato blows, a dead tree can be reduced to a uniform blanket of splinters and chips in half an hour or less! 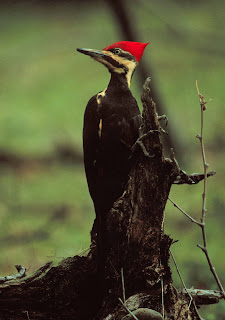 The pileated woodpecker is the largest woodpecker in Illinois. This very active and noisy bird, with its imposing size and striking colors, is conspicuous in its forest environment. About the size of the common crow, this great, black bird has a bright, poppy red crest and white bars that flash on its wings as it flies. The pileated has several calls, but perhaps the most distinctive is the drum. The mellow yet powerful boom of a hollow tree struck by the hammer-like beak resonates throughout the forest—a solemn, ancient sound.

Although the pileated will eat fruit, most of its diet consists of grubs, wood-boring beetles, and ants, all found in decayed wood or stumps. The bird will stay with a tree until all larvae and ants have been consumed. Their elongate, squared off workings in dead and dying trees are distinctive. Pileateds, like all woodpeckers, have several adaptations to aid them in their arboreal lifestyle. Their legs are short and stout and the toes are furnished with strong sharp claws. They have four toes, two of which point forward and two backward. Their tails are composed of stiff feathers terminating in sharp spines that can be pressed against the bark. This serves as a prop to hold the bird in the upright position while it is at work. Their stout beak, with its chisel shaped-point, forms an effective wood-cutting instrument. All these adaptations enable the woodpecker to easily cling to trunks and branches and to strike hard, effective blows with their beaks upon bark or wood. 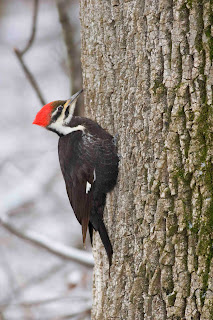 Arboreal in its habits, the pileated is a permanent resident in the remaining heavily forested areas of the state, preferring bottomland forests over uplands. When the wild expanses of forest dwindled to tame woodlots by the turn of the century the pileated, along with the wild turkey, barred owls, and the raven, began to disappear. By the 1920s, though, pileated populations had begun to rebound as the birds slowly became accustomed to civilization and the second growth timber became large enough to supply food and nesting sites. Today, these woodpeckers can even be found near some Illinois cities, including Champaign-Urbana. Perhaps the best place to hear and glimpse the woodpecker is Beall Woods State Park near Mt Carmel, Illinois, or the Cache River State Natural Area, in far southern Illinois.

These denizens of the deep forests and swampy areas connote wildness. A glimpse of a pileated is a tremendous thrill, whether it be a first sighting or the thousandth and evokes the inevitable cry from the novice birdwatcher, "there goes Woody Woodpecker!" 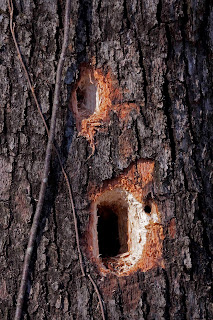 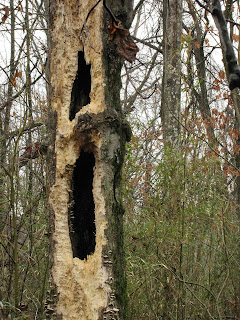