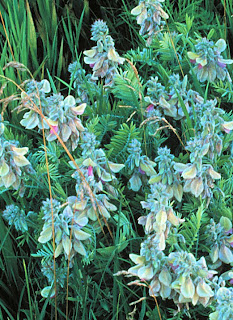 This week's Natural Division is the Rock River Hill Country, just to the East of the Wisconsin Driftless Division encompassing Stephenson County, most of Carroll and Ogle Counties, and parts of Winnebago, Lee, Whiteside and JoDaviess Counties.

This region of rolling, glaciated topography is drained by the Rock River. The soils of this division are thin and are either loess (wind-blown sediment) or glacial till. Two sections make up the division. The Freeport Section is underlain with dolomite and limestone. Outcrops and “dells” occur along streams. The Oregon Section (south central Ogle County) is underlain with sandstone that has formed bluffs, ridges, and ravines.

Prairie once occupied the larger expanses of upland while forests were equally abundant along watercourses. White pine, Canada yew, and yellow birch—northern forest relicts—can still be found in this division. Prairie knobs (islands of prairie that were either too hilly or too troublesome to farm) support downy yellow painted cup and profusions of pale purple coneflower. Castle Rock State Park and Nachusa Grasslands are representative sites of this division. 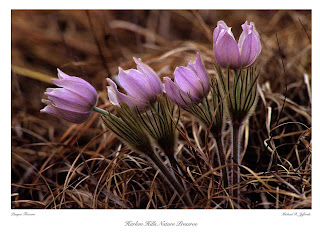 Right now is a good time to look for pasque flowers as they are one of the early bloomers. 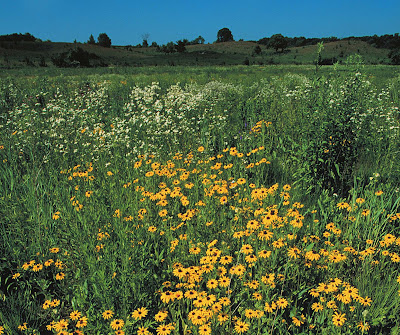 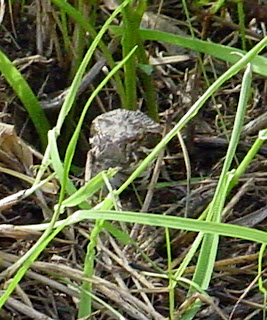 As the winter weather fades away and temperatures begin to rise during spring, reptiles awaken from their winter slumber. For many that spend the cold winter underground, it will take many days of sun to warm their blood. Being cold blooded, a reptile’s physiology depends on heat, the warmer they are the faster they can escape predators, catch a meal, and even digest. The first few days of warm weather, reptiles will be somewhat reluctant to venture from their safe haven and may only peer from the shelter of their winter retreat.

During the cool, early spring weather, reptiles are sluggish and vulnerable to a myriad of predators looking for an easy meal so it is important to have a retreat safely at claw. When they do decide to crawl or slither out, they remain nearby their winter retreat and shuttle above and below ground with the rise and fall of the temperature or dive for their retreat if danger lurks. Some species, such as garter snakes, will emerge quickly and begin mating en masse whereas others such as turtles will take longer awaken. Slowly, they will creep out of their winter torpor and begin to bask in the sun’s warmth. As overnight temperatures eventually warm near the middle to end of spring, reptiles will finally venture away from their winter retreat and begin a sojourn for the necessities of life, foraging, growing, and reproducing, returning to their burrows only with the cool fall weather. 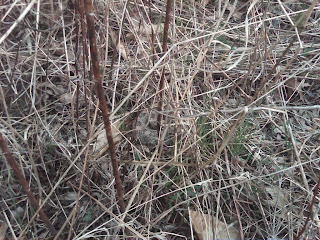 Massasauga hiding in the grass 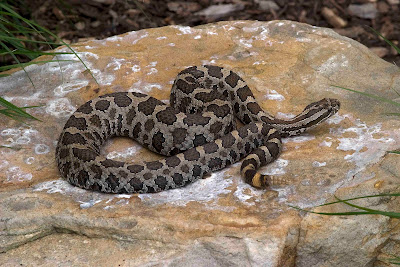 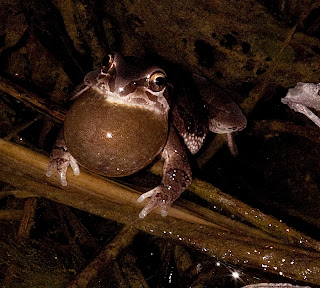 The first faint calls of frogs and toads are often heard during warm spells in late February or early March, but for many species, the warming days of spring bring on their true vocal talents. As both the soil and water gradually warm in spring, frogs and toads awaken from hibernation and assemble in or near shallow water where, as amphibians, they must lay their eggs. In most instances, sounds are produced only by the males, and are usually courtship calls to attract females into a breeding area, but can also be territorial calls to warn other males of rights to a particular spot. Each species has its own distinctive call and breeding period. 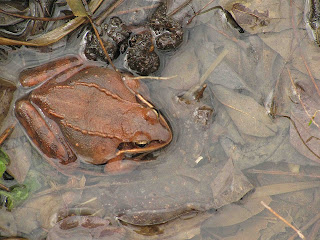 Wood frogs are likely to be the first call heard as they are known to herald the retreat of winter. They sound like a soft, ducklike cackling in shallow ponds. The bird-like, whistling peep of the aptly-named spring peeper almost magically appears after the first warm rains of spring. Next to join in the music is the chorus frog, sounding much like a finger drawn across the teeth of a comb. Then come the omnipresent t

rills of the toads, and somewhat later, the cricket frog will add to the chorus, with mechanical clicks reminiscent of two pebbles striking together. The impressive, double, deep bass notes sung by extremely territorial bullfrogs from May to July have been likened to dueling tubas!

Calm, undisturbed waters with abundant insect life such as swampy, marshy areas, temporary ponds, small lakes, and quiet streams, are all good places to listen to and look for some of these more common toads and frogs. But, toads and frogs are very alert and will often stop calling and leap to the safety of deeper water if disturbed. Also, many species are experts at "throwing" their voices, which makes finding them even more difficult. Simply sitting quietly near one of these likely spots will most often result in actually locating a calling frog or toad. Better yet, for those fortunate enough to live near an active breeding site, the back porch may offer the best seat in the house for these nightly amphibian arias. Although it's unlikely they'll ever threaten the reputation of the Chicago Symphony, the repertoires of toads and frogs create a curious, somewhat captivating, night symphony all their own. 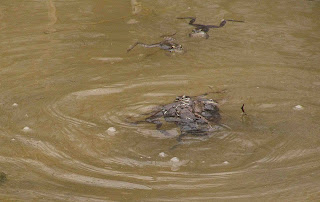 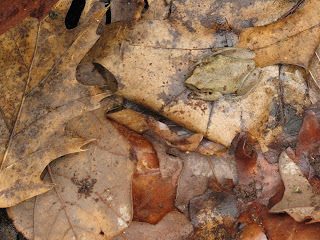 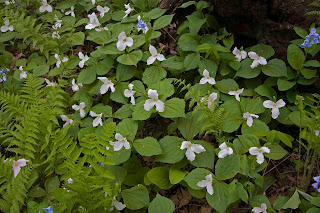 It is almost April and finally Spring. Winter's gray-brown, threadbare blanket of leaves on the forest floor is rapidly being replaced by an explosion of color. Each day brings a new flower species—bloodroot, spring beauty, trout lily, and Dutchman's breeches—unfurling their leaves toward the sun in the race for sunlight before the trees leaf out. Perhaps the most elegant bloomers of the Illinois' woods are the trilliums Illinois has 9 species of trilliums which are easily recognized as their flower parts are arranged in groups of threes—3 petals, 3 sepals and 3 leaves. When the trilliums are in full bloom it is an indisputable sign that winter is over and spring has arrived!

The first to bloom is the snow trillium, poking through a protective blanket of leaves in mid-March. Sometimes they must push through a layer of heavy, wet snow to reach the warming rays of sunshine. Only 4 inches high and pure white in color, they grow in isolated communities in hilly woods and along limestone cliffs.

Prairie trillium is the most common woodland trillium, occurring in every county in the state. Its green leaves are strongly mottled with brown; the red flower is sessile. In the late afternoon sun the three blood-red petals resemble a candle, lighting the patches of darkening shadows.

For those lucky enough to find a rich, undisturbed woods, they are rewarded with the gleam of the large white blossoms of the Great White Trillium—the largest of Illinois’ trilliums. The waxy white flowers change color as they grow older, going from snowy white, through pink, to deep purple-pink before the petals wither. 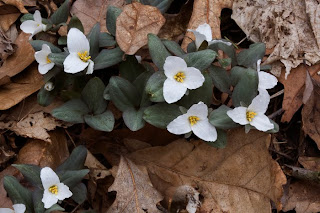 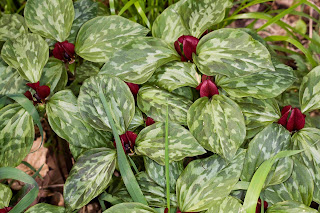