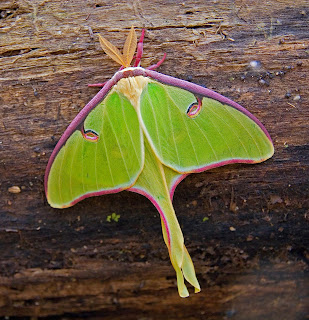 A walk on any trail this time of year may offer the expected deer, numerous bird calls, and blooming summer flowers, but it is the insects, common or rare, that are a delight. It is these unexpected encounters that will hold your interest and pique your curiosity during any forays outdoors.

Look in shady areas of dense vegetation for scorpionflies. While they resemble flies, these insects have two pairs of wings instead of one, like flies, and belong to the insect order Mecoptera. Their head is elongated and if you happen to encounter a male, its genitalia are large and conspicuous and carried curved upward over the back like the sting of a scorpion. Crane flies also may be found in this habitat. These large, mosquito-like insects will hang motionless on stinging nettle, but don't be afraid; while rather large, these insects don't bite, in fact, most don't feed at all as adults. 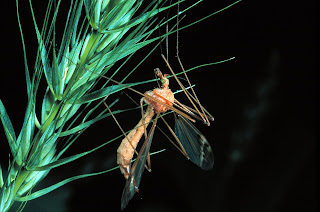 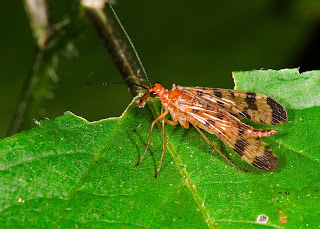 Wet areas offer a plethora of observations from the whimsical gyrations of whirligig beetles to the defense of territories by damselflies and dragonflies.

Summer is the time for many of the large dragonflies to gather in groups. Watch for them as they swoop and dive, catching the abundant insect prey. Along the edges of moist areas look for large gatherings of butterflies and skippers. These gatherings are called puddle clubs and are the purview of newly emerged bachelor males. It is thought that these males, by being together, are creating a "super male" to attract the fancy of passing females.

While clouds of butterflies disturbed from a puddle club are fun to walk through, the single butterfly sitings are no less exciting. From buckeyes to painted ladies to swallowtails, their effortless flitting is a signal of the coming days of summer fun. But what about the moths? A chance encounter of a luna, cecropia, or polyphemus is quite remote during the day. 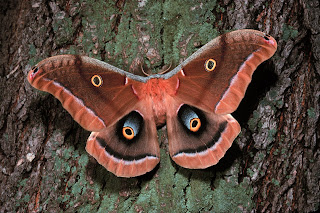 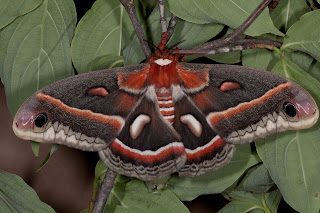 To increase your moth sighting chances, perhaps a light trap is in order. By using a white sheet and a bright white light source, you have created a beacon in the dark which moths and other night flying insects are attracted to. The insects fly toward the light and hit the sheet, climbing around on the sheet

so you are able to get close to study them. During the night, check the trap often as different insects fly at different times. If you don't have access to a light, walk around your hometown checking the bright white lights—an entomological friend spent his youth checking the lights at the local laundromat and gas station.

Take time during these warm days of summer to view some of the many and unusual insects that grace the Illinois landscape.