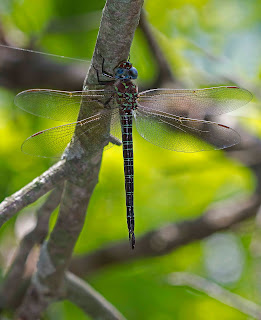 Illinois has 98 species of dragonflies, all of which are descendants of a prehistoric group at least 250 million years old that included some of the largest insects that ever lived. If any of your summer’s wanderings take you near water, take a few minutes to enjoy the iridescent dragonflies.

Dragonflies begin their life in the water as a dull colored, predatory larvae, called a naiad. They are equipped with large, chewing mouthparts with a lower lip that rapidly extends to capture and hold their prey. A meal is made of any unfortunate small crustacean, minnow, tadpole, or other insect larvae that gets in its path. They are able to search the water for prey by expelling water through gills at the end of their abdomen, somewhat like a hydraulic cannon or a jet engine. 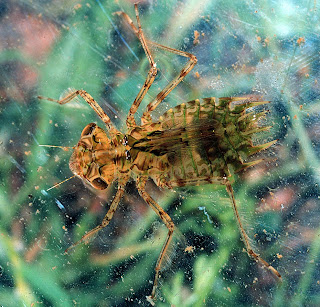 After one or more years of aquatic life, if the larvae have been able to avoid the attention of fish, their chief predators, they will climb out of the water and metamorphose into an adult. Supporting two pair of rigid, transparent wings, which are held outstretched even at rest, and a thick body, dragonflies do not give any outward appearance of grace on the wing. But can they fly! Some species have been clocked at 60 miles per hour as they fly forward, backward, or sideways.

Their eyes are the largest in the insect world, providing the dragonflies excellent eyesight. They can observe insect prey up to forty yards away. Their forward thrust legs are located in a cluster near the front of the thorax and are arranged in a basketlike way to catch prey and quickly transfer it to the mouth. Dragonflies are so well-adapted as airborne predators that their legs are nearly useless for walking. 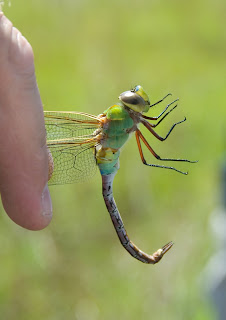 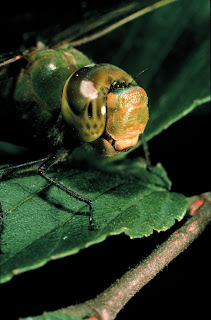 Their fierce appearance has granted them all sorts of nasty abilities and names. The unenlightened once thought dragonflies were capable of sewing shut the mouths of men who cursed and women who scolded, or they sewed up the ears of people who enjoyed gossip. From these myths a variety of names sprung up such as—snake doctors, horse stingers, sewing needles, and the Devil's darning needle. The myths and names are in reference to the distinctive shape of their abdomen and the mistaken belief that dragonflies are capable of inflicting stings and were harmful to humans. The only harm these insects do is to mosquitoes, gnats and flies, some of their favorite food items, thus earning them the well-deserved name of mosquito hawk. 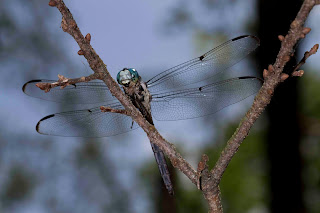