Now that spring has arrived, butterflies are starting to appear in numbers, newly-emerged from hidden chrysalids where most spent the winter. A walk along a sunny path or deserted road through the woods, or along the margin of a lake, pond or stream, may yield a unique opportunity for viewing butterfly puddle-clubbing behavior, the proverbial "boys day out at the old watering hole." Puddle-clubbing is a gathering of bachelor male butterflies, usually of the same species, at a moist spot on the ground. Their bachelor status is confirmed by the absence of tell-tail flight marks on their wings such as scratches or faded color. 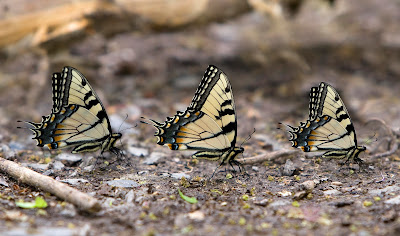 For most of us, an encounter with a puddle club occurs only when we are suddenly in the center of a cloud of butterflies, having clumsily walked through the gathering. At times though, usually when the gathering consists of a large showy species, such as the tiger swallowtail, we see the club in time and can observe from a distance. In Illinois, a puddle club may consist of only a few males, or as many as a few dozen. Tropical puddle clubs, however, often consist of several hundred males. A patient watcher often sees the reason for puddle-clubbing. 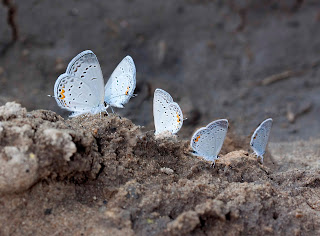 When an appropriate butterfly, usually of the right size and shape, flies near the gathering, males will swarm to meet the newcomer, hoping it to be a female of the same species. If such is the case, several males may initiate courtship behavior; it is then up to the female to choose her favorite. The other suitors may continue to pursue for a time, but most will soon return to await another opportunity. If it should be only another male or another species, the group will quickly settle down again. 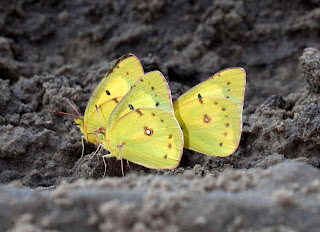 Why do butterflies, from the largest swallowtails to the smallest blues or coppers behave this way? No one knows for sure, but entomologists believe that by gathering together, the club creates "a super male", one that is much more likely to attract the fancy of a passing female. 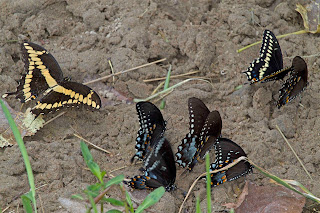 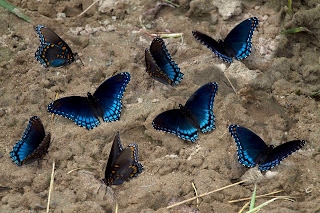 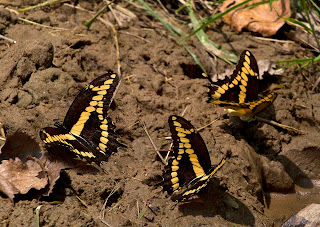 Photos by Michael Jeffords
Posted by INHS at Friday, April 23, 2010