What Are Natural Divisions? 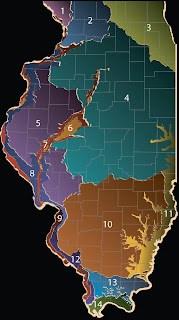 Scientists have divided the terrestrial part of the earth into large ecological regions called biomes. Examples of worldwide biomes include tropical rainforest, Asian steppe, African savanna, and a host of others. The North American continent also has biomes, such as the Arctic tundra, Sonoran desert, and Appalachian forest.

Illinois, too, has a diversity of landscapes that can be described by differences in topography, glacial history, bedrock, soils, and the distribution of native plants and animals. Using these natural features, Illinois can be divided into 14 natural divisions. The natural divisions of Illinois were defined in 1973 in a technical report authored by then state botanist John Schwegman and colleagues. According to Schwegman, “Natural divisions are geographic regions of a larger entity like a state or a continent. A division contains similar landscapes, climates, and substrate features like bedrock and soils that support similar vegetation and wildlife over the division’s area. Natural divisions help conservationists classify land for purposes like protecting natural diversity.”

These 14 divisions were further partitioned into 33 subdivisions. Over the years, Illinois’ natural divisions have proven very useful to the natural area preservation movement within the state. They have helped biologists categorize and prioritize Illinois’ 90+ natural habitats for preservation efforts. Illinois was one of the first states to have its natural divisions defined and this classification system has guided the development of the state’s nature preserve system, the Illinois Natural Areas Inventory, and the Illinois Natural Areas Plan.